In the first review I covered basically what Glass is and what its not, what it can & can’t do.

Now on to usability!

Now on to the CONS:

So what do I use it for?  Whats my typical day?

I wake up and unplug them.  Oh because while they charge and if they have internet connectivity, they upload your images and videos to your private google account.  I put them on as part of my getting dressed ritual.  They’re with me while I drive and I can check stocks, weather and scores while I drive.  I get notifications while its sleeping on my face and I can just gesture to see what email just came in.  I usually don’t have it read aloud but I could if I ask it to.  So in that respect, its cool to know that my informational fix is quenched by simply knowing the sender and subject of a recently received email.

I keep them on while in the office but take them off if someone walks into the office.  I keep them on for errands but take them off for lunch.  Then put them back on for the rest of the afternoon.  Usually have them for my kid’s soccer practice for snapping pics.  I take them to solar installations with me to get ideas for the app Im working on.  I usually program with it as well when I develop iOS apps to get ideas for a programming app.  Then when I get home I take them off just because I want to rest.  Unless I decide to try a cooking recipe.

So as you can see, Im not yet a fully fledged Glass Explorer.  But I think its just a matter of time.

I got my Glass a little late…but here is my review!

You might think the answer is obvious, but its not.  Its a wearable computer but its not a full blown computer.  Does that make it less of a computer?  Not really, unless you consider ipads and iphones less than a computer because you can’t do ALL the things you can normally do on a full blown laptop.

What can you do with them?

Since we already mentioned you can’t do everything you can on a full blown computer, let’s talk about what we CAN DO!

Out of the box, Glass comes with a few commands such as those for taking pictures, recording video and a few others.  Out of these features, probably the coolest is taking pictures and videos handsfree.  This is very nice because holding the phone with a busy hand is a pain, not to mention keeping it pointed in the right direction the whole time.

Ok so we wouldn’t pay money to get a wearable camera right!?  So what else can we do?  Google Glass connects to the internet via a mobile device (for now) or through a wifi connection.  This way you can access the apps for Glass and ‘install’ them.  Install is a relative words nowadays because much the same way iOS and Android and Computer based apps are now native & web based, so are Glass apps.  As a matter of fact the first Glass apps were all web based, called Glassware!  They were web services you accessed online and interacted with to do certain tasks.  This is what developers had access to in the beginning.  Now you can actually make native apps for Glass using their new GDK.  This lets you do some pretty neat things like play games and others.

There is so much, Ill just list what you can do with certain apps:

How do they work?

This is the main card.  It displays the time and the command to give to Glass.  Speaking “ok glass” gives you access to a voice-command launch menu.  That menu card looks like this:

As you can see there are some options such as getting directions, sending messages, making calls or taking notes.  These are default commands installed.  As you install new apps, new commands are sometimes added to this menu.  Not all new apps add commands, some apps simply send you notifications or new cards only when an event takes place.  These usually come from those web based or Glassware apps we mentioned.  Such as when you get a call or email.

The rest of the time, your Glass has a timeline which looks like this: 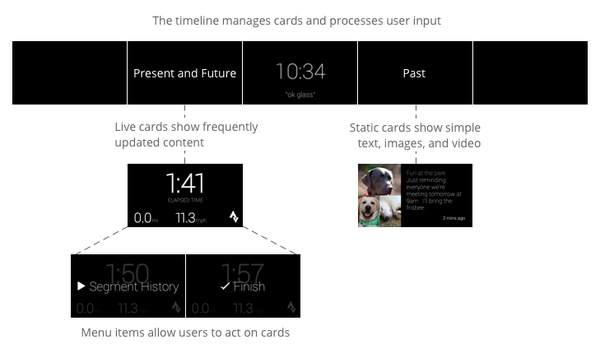 As you can see from the image, Present & Future cards are to the left and Past cards are on the right.  You can swipe through this timeline back and forth.

This gives you an idea of how it works.  Now on to the neat things you can do.

Some cool apps I consider useful are the Stock cards, weather cards and WorldLens.  The Stock & Weather cards are Glassware that run off of a concept I was unfamiliar with until a few weeks ago, called Google Now Cards.  These are cards you create yourself and only send you info when important information changes.  You can use them in the Google Now iOS app for example.

The WorldLens app is one that lets you point Glass at a text in a foreign language and it will translate it for you!

Allthecooks lets you look up a recipe while cooking and you can go through it step by step!

Other apps I know people are working on or are out there but I don’t use:

GolfSight is an app that helps you play golf, calculating distances and club selection.

Spellista is a sort of spelling game that you can play with other users.

Ill keep posting with new app ideas I hear from fellow programmers.  Its pretty exciting to be able to interact with the internet, hardware and information handsfree.  I am personally juggling ideas for Solar Installations and programming aides using Glass.

Who is Glass NOT for?

People who are clumsy!